Well, I first loved Desktops
But then for my B-day some years ago, I got a Laptop.
My opinion is Laptops are more comfty♥
-----------
What do you think?

laptop, cuz i need it for school, and it's portable, i mean, you cant go sit in your bed with a desktop computer.
and just to say, a laptop is a computer, so when you say i like computers, that means you like laptops and net books and desktops.. just sayin...

You should change it to desktop. Sandy's right, a laptop is technically a computer

Laptops<3 I love love love my laptop. Their private, portable, and I love the inbuilt keys and the, I think it's called a tablet? The mouse thing. I hate actual mouses. Scrolling is horrible on it. And their unresponsive sometimes. The only disadv. to a laptop, imo, is charging. That gets annoying after a while.

We have a desktop. I have trouble using my finger as a mouse on a laptop.
And with a desktop it can be monitored to see who is doing what on the computer and the amount of time you spend and it can be safer for parents to know their kids are safe online. 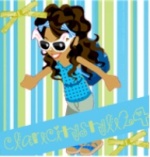 priscillaballerina31 wrote:We have a desktop. I have trouble using my finger as a mouse on a laptop.
And with a desktop it can be monitored to see who is doing what on the computer and the amount of time you spend and it can be safer for parents to know their kids are safe online.

You have a point there.
If you have a desktop, time spent online is much less, which is a much better thing.

I like both. I feel professional on desktops, and they are better for office work more often.
They also don't have to be charged, and have bigger screens and keyboards. Speakers are usually better, as well as volume options.
Laptops are nice too. They are portable, and private, and you can customize them. Sometimes using the mouse on laptops gets me annoyed, especially on Macs. Also, the screen is too bright sometimes, which I also don't like. I know you can change the screen settings, but I just think they're way too extra bright. Charging, like said above is a problem, and you have to be extra gentle with them. Buy a separate slip, and a cover, and keep it nicely in your bag. Also, most people judge others on their laptops. It's also a pain to keep on connecting it to a printer, and stuff.

But both are great (:

I like desktops better. I use a desktop, lol.
They're faster than laptops. A lot faster.
I don't use my laptop very much because it's really slow. Or maybe I'm just not used to it because even though I have so many programs on my desktop, it doesn't freeze or go slow.

And if you think that mice are bad... o__O I think you're buying the wrong brand or the one you're using is just really, really old. Mine works fine, and it's pink ^^

I just have all of my programs and bookmarks and everything on my desktop, and it's fast, so I prefer it.

I love my laptop, I really like it better. Its portable, and I can use it on a small little table I have on my bed, and feel very comfortable

Laptop because you can carry them:)

When I was little I loved! desktops because they were so big screen and when I became older I found out new kind of computer is out and I HATED THE LAPTOPS! lol I really did. Than Now that my parnets told me I had to get one. Now that I have one I really like it but I still have a place in my heart for desktops.