Here's my actual final entry! Its a rhyming story!

One fine day in the middle of July
A man in a hat was just passing by
He noticed a hive, and heard the hum of bees
A large yellow shape just hanging in the trees
The man in the hat, well he felt a bit peckish
And the man in the hat had a bee honey fetish
That sweet sticky stuff, he thought, was yum yum
And at once he wanted some in his tum tum
He tried so hard to reach, but he couldn't at all
For his arms and his legs we're simply too small
But still his tongue longed for the tingly sensation
And for this little man, twas too great a temptation
With all of his might, his shortness forgotten
He jumped up and grabbed at the beehive, the bottom
He cried out "Wahoo!" And looked all around
His footsies and tootsies so far from the ground
Then the man in the hat, who's name, it was chuck
Said softly, "Aww crumpets, me thinks i am stuck"
His jumping and grabbing had woken the buzzers
The bees (who we're German) yelled "Quick! Wake ze uzzers!
We're under attack from a strange little fellow
Eins, Zwei, Drei! Black and Yellow! Black and Yellow!"
The man in the hat stared wide eyed as they flew
Somehow one found its way inside of Chuck's shoe!
Chuck yelped as he grabbed his foot by surprise
And his behind hit the floor before he could realise
One hand is no use for hanging onto a hive
He took off his shoe and saw the bee was alive
The bee buzzed away, quite bewildered, confused
And im hoping by now that you all are amused
This tale has a moral, a lesson to teach
Don't jump for the honey, when its far out of reach
Instead, have some common sense. One thing more
Chuck... Next time... Buy honey from a grocery store!
(C) JLBABV 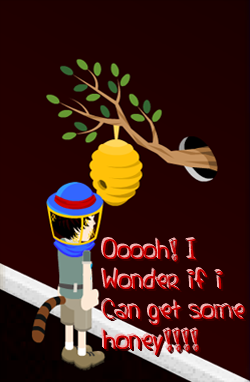 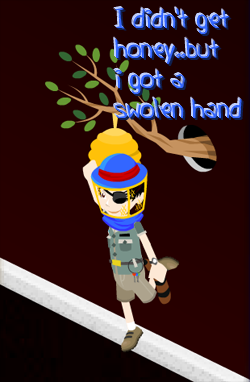 The deadline is... over! I'll be locking this thread now, the winner will be announced when Chuck is online. Thanks for your patience!

The rest of you who joined this contest gets +5 Happiness points.