Who is your favourite? Why?

Lol this might be a little weird but when I was about 4-9 I loved the Bratz. I would always watch the TV show and buy almost all the Cloe dolls. Anyhow I look almost the same as her when I was little and I would always be proud of that. (lol) Anyhow I am here just to know what was your favourite person and why. That all. Just asking heehee

my favorite doll when i was little was the Sasha doll from the Bratz rock angels collection. but I've always preferred barbies.

I had so many of those when I was younger... I remember being obsessed with them. My favourite was always Chloe. I also liked some others, I can't really remember their names though. Dana and Phoebe, I think?

Thank you everyone who voted. Thanks for telling me a little about your childhood it is always wonderful to go back in time and remember all that tea party time and all that doll house time. Also my favourite was begging my parnets to get me the new doll! Lol

I also was in too barbies alot too. The ones I loved were the movie dolls I love those!!! I still have my bratz but I got rid of all my barbies I wish I didn't. The ones I had were : 1. Genevieve 2. Annalise (she was my favourite) 3. Elina 4. Annika (my second favourite) I am still wanting the christmas carol doll she is BEAUTIFUL! I know I am older but I like to collet them. And be prond of myself.

Omg, I so forgot about them, I used to collect them too! But I have no idea where they are now o.o
Anyways, my favourite one was Yasmin, and I think it has always been<3. But I think I was pretty more obsessed with barbies, I remember I used to cut their hair loool. I was about three or four by that time

I also used to have MyScenes, they were like extremely popular, back then. I think it was like in 2002 or so. It's like so much time I haven't heard of them. Imo, I think that some dolls that they now make are kinda creepy

I never liked bratz.
Their heads seemed too big for me.
But I always thought the prettiest way Chloe

I liked all of the dolls:) I remember the show, i used to love that show before it was canceled. I heard that there's still new episodes in the UK because more people watched it over there. Also i remember the bratz boys and the movies... 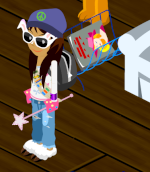