Animal Park written by me. :)

Animal Park written by me. :)

[Scene 1, Zoo.]
The animals... all asleep. Sound asleep. Never to put up a paw, a claw, a fin, a flipper, a nail, or a hoove. The kind of sleep you get when you've stayed up for days and nights after eating gallons of candy to stay up. The sleep I love. But all that can change in time, as my friend Alice (she's not really my friend.. more like an evil co-worker) yelled "MEAT TIME!!" She should know by now that it makes the animals scream and roar. Stupid girl. I've only worked here for a year, and I know more than
she knows in her life time of working here. Truth is, she's not always been on the "Bright Side" of town. I mean.. she did spell her name with an "s" on her test the other day. God knows how she even passed it.

"Hello, CARL." She screamed at me. I was going to hit her with the raw steak I was holding in my hands.. but I wanted to be the bigger person. "My name isn't CARL, Alice. Its Carlye." I replied right back at to her.. but right in her face. "HMPH, says you. CARL. Anyways, I need you to feed the Panthers today, I'm too busy being awesome." She said as she was fixing her name tag that was missing the "c". "Well Alie," I mocked. "I'm very busy, and I can't do your work. So can you stop being awesome for atleast an hour and get your body to work? Or is that a problem? I can let our boss know. Is it? Alie?"

"No.. Of course not. Its never a problem. I guess i'm just too awesome for this place anyways." She continued "Or atleast for you." She took the steak out of my hands and then trotted off to where ever that thing goes. I'm guessing to a dark land of fire and trolls. But maybe thats just me... or not.

[Scene 2, Bosses Office]
"Hey boss, i'm really annoyed with Alice." I said as I chopped of a piece of apple
and it went down my throat. "Well Carlye, maybe if you just ignore he-" He stopped.
Then continued. "What in the SAN HECK IS SHE DOING!?" He roared. Louder than the lions. Which scared me.. since I WAS right next to him. Notice how I said was... I think I got pushed back to the wall from all of that. Now I just had to see what Alice was doing.. but my boss locked the door. "UGH. Great.. thats just what I need. A nice cup of "I'mLockedInHere." I had to think of a plan... OH WAIT! My boss is really short! He has a stool to see outside the high window! I grabbed it and dragged the stupid thing to the window. YES!!

Are you a professional writer?? I like your Animal park story:) 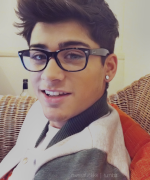