Hey, I have a question:

I played through the new Wii game and got the first code. My mom made her own account on the game, played and received the very same code.

It only worked on one BABV account. Is this how it's supposed to be? One game only gives one set of codes that can only be used once? How does that work for families with multiple players? It seems unfair to expect them to purchase the same game more than once

EDIT: Now my son has played through and got the same code! yesh

*Please do not comment on this topic unless you are a CyBearGuide, thank you!*

Thank you for your honest feedback. The Wii/DS codes that are generated can be used on up to 3 accounts so that families can all enjoy. If your codes only worked one time only, kindly email us at vwhelp@buildabear.com including the actual codes you're having issues with. 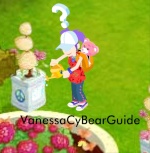 Wonderful thank you! A couple of the codes allowed us to use them 3 times but the others are not. I will email! Thanks again!!

Do JrCyBearGuides count if so,


I have had the same problem with me and my brother we had gotten the game for easter but i emailed and the problem is now fixed. Thanks for posting this VanessaCyBearGuide's help was very inportant. And MamaNoodles your feedback really helped.

I'm glad I was able to help